The young violinist Roberta Verna (born 1998), comes from a family of musicians and received her first violin lessons at the age of five. She previously studied as a junior student in the class of Max Speermann at the HfM Würzburg and later with Prof. Daniel Gaede at the HfM Nuremberg. She is currently studying for a bachelor's degree with Prof. Herwig Zack at the HfM Würzburg. Roberta has already been awarded numerous prizes at national and international competitions. In 2017, she and her brother Richard Verna (cellist) were the youngest prize winners to receive the Cultural Promotion Prize of the City of Würzburg. Numerous solo recitals have taken her to festivals such as the Kissinger Winterzauber and the Arbanassi Summer Music Festival in Bulgaria. In master classes with Ivry Gitlis, Maxim Vengerov, Gil Shaham, Pierre Amoyal, Rolande Daugareil, Irvine Arditti, Gerhard Schulz and many other personalities, she was able to gather further musical impulses. Roberta Verna is also in great demand as a chamber and orchestral musician and has performed with renowned orchestras such as the Gustav Mahler Youth Orchestra, the European Philharmonic of Switzerland and the Lied Festival St. Moritz. She has worked with renowned artists such as Mariss Jansons, Daniel Harding, Martha Argerich, Charles Dutoit, Lisa Bathiashvili, Nils Mönkemeier, Vladimir Jurowski, Lorenzo Viotti and numerous others. As a prize winner of the German Musical Instrument Fund competition, Roberta Verna plays a violin by Antonio Stradivari, Cremona 1703, which is made available to her by the Deutsche Stiftung Musikleben in Hamburg. Since March 2020, she has been a member of the Orchestra Academy of the Bavarian State Orchestra of the Munich State Opera. From September this year she will take up her position as 1st concertmaster of the Copenhagen Phil. 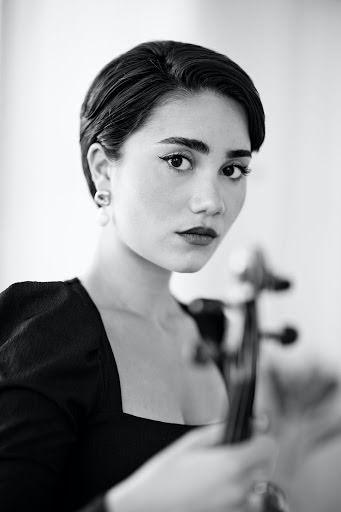