Sara Domjanić (Vaduz, 1997) started playing the violin at the age of four. By the age of eleven she had already successfully auditioned for the University of Arts in Berlin, where she continued as a junior student in Professor Latica Honda-Rosenberg’s class. After finishing her Bachelor with Professor Antje Weithaas at the “Hochschule für Musik Hanns Eisler” in Berlin, Sara is cur- rently studying at the “Hochschule für Musik und Theater” in Munich with Professor Ana Chumachenco.

She has attended masterclasses in the International Music Academy in Liechtenstein and the Kronberg Academy with Thomas Brandis, Coosje Wijzenbeek, Ana Chumachenco and Rudens Turku.
As a winner of the Croatian youth choice for the young musicians in the final of “Eurovision Young Musicians”, she was representing Croatia in Cologne, Germany, in May 2014. In October 2021 she played in the Semi-Finals of the Joseph Joachim Competition.

Among others, Sara had the opportunity to perform with the Dubrovnik Symphony Orchestra, the Zagreb Soloists, the WDR Sympkhony Orchestra and Kristiina Poska, the Hong Kong Philharmonic Orchestra under the baton of Yaron Traub and at festivals, including Kissinger Summer in Germany and the

“FESTIVAL NEXT GENERATION” Bad Ragaz, in Switzerland.
Sara Domjanić has received support from the Conny-Maeva Charitable Foundation, the Guido-Feger-Foundation and the “Musik & Jugend” charita- ble foundation. She plays a Stephan von Baehr “Antonio Stradivari – Golden Period” violin, which was made in 2014. 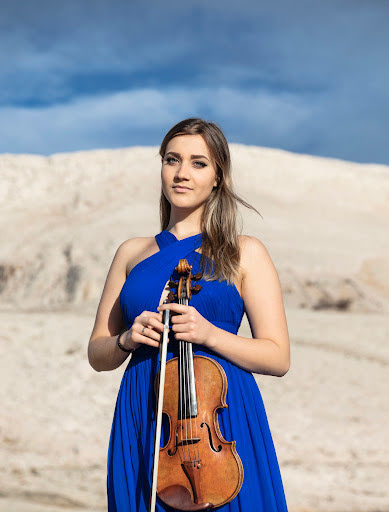