Julita Fasseva, born in Veliko Tarnovo (Bulgaria) moved at the age of 9 with her parents to Germany. She makes her first musical experience at the piano.

After a career as a cellist, at the age of 18, she changes the cello for the double bass.

Before obtaining the orchestral diploma at the 'Hochschule für Musik und Darstellende Kunst  Frankfurt' in the double bass class of Prof. Günter Klaus, she also studied in Weimar with Hans Dieter Koch and in Saarbrücken with Prof. Klaus Trumpf.

Youth Orchestras as the Schleswig-Holstein Youth Orchestra and the Junge Deutsche Philharmonie are the first orchestral experiences for Julita.

Since 1999 she is a member of the bass section of the Antwerp Symphony Orchestra / Belgium.

In addition to her orchestral work Julita is active in various national and international orchestras and ensembles such as the "National Orchestra of Belgium", the "Orchestre Philharmonique du Luxembourg", Ictus Ensemble, Spectra Ensemble, the "Deutsche Radio Philharmonie Saarbrücken Kaiserslautern" and the “Les Dissonances”  in Paris.

Her first opus "Prituri se planinata" for double bass solo and other pieces will come out on a cd decicated to Bulgarian composers. 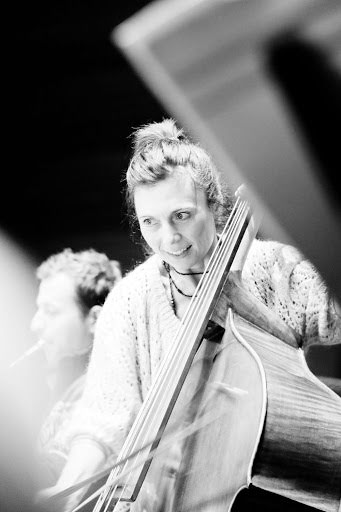